Music inspired by dreams: A Conversation with Ted Murray Jones

You won’t be surprised to learn that one of the highlights of my year is attending the International Study of Dreams annual conference. At these gatherings several hundred people from around the world–including neuroscientists, psychologists, mystics, and artists spend several days together attending lectures, workshops, and symposia examining the topic of dreams from various angles.

During one of these conferences some five years ago, a gentleman with a warm southern accent invited my friends and me to sit outside, sip whiskey, and read tarot cards. (Yes, that’s how we dreamers have fun.)

That was how I met Ted Murray Jones, who I later learned was a talented musician and songwriter from just outside Nashville. Over the years I’ve become a fan of Ted’s dream-inspired songs. Top on my playlist these days is his album: Life and the Hereafter, which I hope you’ll listen to — but first, listen to our conversation about dreams, music, poetry and inspiration, which was recorded recently when Ted was a guest on my podcast, DreamWork. 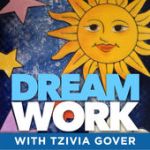 In 2000, Ted Jones founded Dream Train Music and produced albums for Jonathan Singleton and Josh Smith. After recording the acclaimed “Poet, Soldier, Wise Man, King”, a collaborative effort with Jonathan Singleton, Sergio Webb, and Bruce Wallace, he embarked on his solo career with the RM Series. Ted is a philanthropist whose gift to the world is a fresh, clever, sublime interpretation of the joy, hope, pain, and sorrow of life that each of us is so familiar with. With each new album, Ted approaches his art with renewed vigor and unwavering devotion to his cause. Indeed, writing is the life force which drives this modern day knight on a quest for truth, beauty, loyalty, and elegant simplicity.