MLK’s Dream and Mine

Standing at the MLK memorial contemplating his dream and mine.

On being link in liberty’s chain

NORTHAMPTON – On a cool, crisp November night, my co-worker Anita Gallers and I stood in front of the new Martin Luther King Jr. Memorial in Washington, D.C.

We were in the nation’s capital because The Care Center, the GED program for teen mothers for which we work, was to be honored by the White House with ceremonies and an award that evening and the next day. The award was in recognition of the school’s programs in the humanities, including a college program for low-income women, of which Anita is the course director, and the poetry program that I founded and run at the center.

On this night, a group of our colleagues – administrators, board members, along with two students – were attending a reception for awardees. The next day they would attend the awards ceremony in the White House.

Because of strict limits placed on the event by the White House, only a very limited number of participants from our school could attend.

Thus Anita and I had some free time to explore. So we visited the monuments to great presidents like Franklin Delano Roosevelt, Thomas Jefferson, and Abraham Lincoln, and to soldiers who fought in World War II, Korea, and Vietnam. We had most been looking forward to seeing the Martin Luther King Jr. Memorial, which had just opened to the public.

As I stood before the enormous stone edifice, with Dr. King towering above me, arms crossed, and with a crescent moon glowing above his broad shoulder, I remembered how this man’s words once inspired me to dedicate my talents and time to helping people learn to read, write, and engage the power of their imaginations.

It was just after the new year in 2001 that I began listening to Dr. King’s recorded speeches and reading his books. As I began to understand the moral weight and spiritual depth of his words, I also understood that they were true not only for the 1950s and ’60s when he wrote and spoke them, but for that moment at the start of the 21st century – and for me – as well.

His words were a powerful tide that moved me forward and within months of immersing myself in the stream of his oration, I had signed on to teach poetry to teen mothers once a week during my lunch hour from my job as a journalist. Not long after that I had embarked upon a new career, teaching poetry to teen moms and others in adult literacy programs.

Now, 12 years later, in the White House not far from where I stood, First Lady Michelle Obama would honor my school, my students, my colleagues – and yes, my work, too.

At the King Memorial I reached out to touch King’s words, etched into granite: “Make a career of humanity. Commit yourself to the noble struggle for equal rights. You will make a greater person of yourself, a greater nation of your country, and a finer world to live in.”

As my fingertips touched the cool stone and the sharp edge of the inscribed letters, I felt a surge of connection as the power of history grounded me in the moment.

King’s words were links in a chain that connected each monument we had visited that night, from Thomas Jefferson’s call to liberate the human mind, to Lincoln’s admonishments to liberate men and women from the bonds of human slavery and Civil War, to FDR’s still timely call to free all people from economic injustice.

Anita and I, along with our students and our school, were each doing our parts to connect to this chain of evolving human consciousness toward complete freedom of body, mind, and spirit, and continue it forward.

Earlier that evening, Anita and I had asked a passerby to take our photo at the Jefferson Memorial. As this stranger snapped our picture we exchanged the quick details of our visits. Our new acquaintance had traveled to D.C. from North Dakota for a public health conference.

We told her about our school and our award. As she handed back the camera she said, “Thank you for being teachers.”

It was a humble and sublime moment. This simple, heartfelt offering was deep and meaningful. This woman’s words, echoed amongst those carved into stone that had been inspiring us all evening, and they reminded me why I was there in D.C. that night – and how I got there, as well.

Tzivia Gover of Northampton is the author of “Learning in Mrs. Towne’s House: A Teacher, Her Students, and The Woman Who Inspired Them” (Leveller’s Press, Florence), a book about The Care Center in Holyoke, where she works. 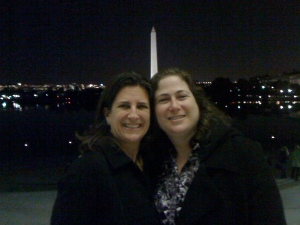 A passerby took this picture of Anita and me at the Jefferson Memorial. When she handed back my camera phone she said, "Thank you for being teachers."

6 responses to “MLK’s Dream and Mine”